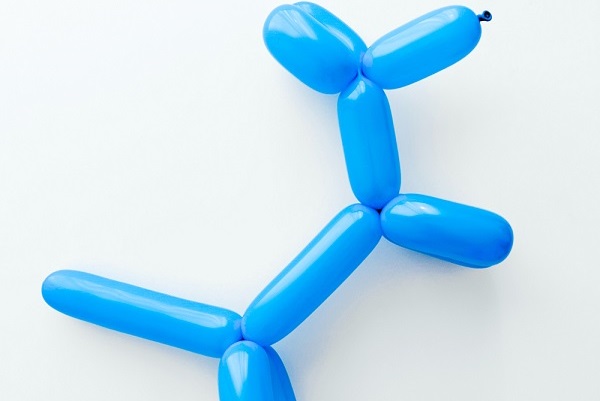 I am beginning to think I am my own cautionary tale.

When my husband and I decided to break down and get a dog six years ago, we told ourselves we were doing it for the kids. We’d held back for years. Thank goodness we did. As a blended family of six—with me being the only female—we had more than enough on our plate. I won’t go into all the details, but suffice it to say as two fresh divorcees, my husband and I spent enough time in court or therapists’ couches or school counsellors’ offices to want to add a furry child into the mix.

We waited till the guys were teenagers. We even called our dog Fin, short for “Finally,” as in, “We finally have a dog”—a secret only being revealed here, a story that makes our macho sons’ eyes collectively roll.

We chose a pug.

That was probably our first mistake—thinking that by waiting for “Finally” we could maintain some sort of dignified detachment. I swore we would do it right the first time. Both my husband and I had grown up with dogs. We had big ideas about setting boundaries.

“We’ll keep him off the furniture,” I told my husband in a convincing tone of voice.

“We’re doing this for the kids.”

You can probably see where I’m going with this. Denial is the pacifier for the adult mind.

Fin arrived, all seven or so feather-soft puppy pounds of him, and instantly stole us away with his big brown, rheumy eyes, his clownish antics, and his friendly, yet Buddha-like disposition.

After exactly one day in our house, I looked into those brown eyes, and realized it wasn’t a whole lot different from the way mothers imprint on their children. That we’d officially been adopted. And as Fin’s new pug parents, there was absolutely nothing we wouldn’t do for him.

We kidded ourselves we might have been hypnotized. We actually managed to make him sleep downstairs for a full seven months in his crate, until he went for his first surgery—a complicated neutering procedure—and we pulled him into our bed one night to stop him from playing with his stitches.

Do I need to say out loud that he’s never left our bed since? That he’s so easygoing we never bothered with obedience classes? That we say we did this for the kids, but in reality, my husband and I are the two biggest kids in the house?

I suspect I’ve already given myself away. Literally.

Our sons have succumbed to Fin being their “brother”—the furry, favourite child among us—especially since he happens to “share their DNA.” Or so we joke.

The last laugh is on us.

Fin, like most pugs, rarely leaves our side. We feed him fresh, raw sources of protein and pureed vegetables, vitamins, and healthy supplements—the first of which he absolutely adores.

We give him dried sardines for tolerating daily eye drops.

We take him for daily walks at the local beach, feeding him his favourite berries, whenever they are in season.

If he needs us, if he needs pretty much anything, he has learned to cry like a baby.

I take full responsibility for creating an irresistible monster.

Boundaries? We gave those up along with the little fence we used to wrap around Fin’s crate in the old days when he slept in his own bed.

I should smarten up, shouldn’t I?

I’ve checked in with the furry child, however, and whenever I stare deep into those brown eyes, the only answer I get is this: “Can I get some more of those blueberries, Mom?”